I have lost count on the amount of times that I have read this diary. In fact, I read it so much, my copy literally fell apart and I ended up having to buy another one! That’s how much the diary of Anne Frank meant to me growing up.

Born in Frankfurt, Germany in 1929, Anne Frank and her family fled to the Netherlands when Hitler came to power. For years, they lived a quiet, peaceful life until the invasion of the Nazis in 1940. From there, Anne’s life was horribly restricted – she was separated from her friends, banned from doing anything that she loved (including ice-skating, visiting houses and going to the movies), and lived with the fear of one day being sent to the death camps in Poland.

In 1942, for her thirteenth birthday, Anne received what would become one of the most famous books in the world: her diary. She began writing in it immediately, thrilled to think of this diary as her true friend. Just a couple of weeks later, when her sister received summons for deportation, the Frank family went into hiding behind a bookcase in her father’s office. They stayed there for two years, receiving food and care from trusted friends, until they were finally arrested in 1944. Anne never lived to see her sixteenth birthday – she died in Bergen-Belsen in February or March 1945.

Otto Frank, Anne’s father, was the only one of his family to survive the war and returned home to find Anne’s diary. It was he who would begin the journey to get it published and work on spreading the word of his daughter.

Anne’s diary shows that despite everything that was happening in her life, she went through many things that young women today go through – friendship woes, boy troubles, puberty and family arguments. It shows that despite that her freedom was being restricted more and more by the Nazis, she still found the ability to enjoy life as much as she could.

Writing in her diary was Anne’s way to escape from the constant problems in the Secret Annexe in those two years. The arguments between the eight people in hiding, the conflicts that she endured with her mother and Fritz Pfeffer and her feelings towards Peter van Pels. It also showed that Anne was also aware of the dangers and fear of the world outside, but her hope for freedom.

One quote that I particularly like was written on 26th May 1944: ‘I’ve asked myself again and again if we hadn’t gone into hiding, if we were dead now and didn’t have to go through this misery, especially so that the others could be spared the burden. But we all shrink from this thought. We still love life, we haven’t yet forgotten the voice of nature, and we keep hoping, hoping for…everything.’ This quote, to me, represents that despite everything happening, she still held onto hope for a new change in the world. And while Anne did not live to see it, that change finally came when the Second World War ended in 1945.

The Diary of Anne Frank is a book that I believe, everybody should read. It’s probably the most well-known story to ever come out of the Second World War. It shows the troubles that the Jews endured because of the Nazis, but it also shows Anne’s determination and hopes for her life. And while she may not have lived to see it happen, her wish to become ‘a famous writer’ did come true. 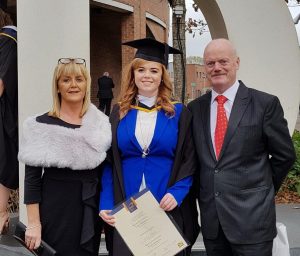